JUser: :_load: Unable to load user with ID: 135
Subscribe to this RSS feed 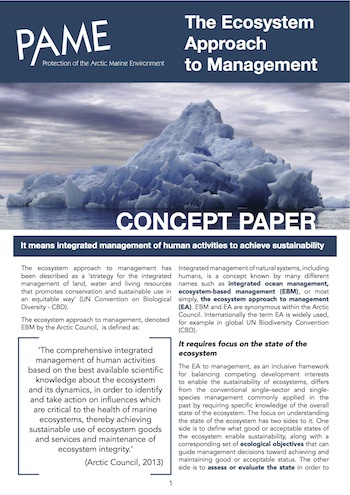 PAME has published a Concept Paper on Ecosystem Approach to Management of the Arctic marine ecosystems. This Paper defines the EA approach and identifies the framework for implementation of the EA in the Arctic and emphasizes the following main elements that can be seen as steps in an iterative implementation cycle:     • Identify the ecosystem

Large Marine Ecosystems (LMEs) represent the appropriate and primary units for applying the ecosystem approach to management of the marine environment recognizing that it accommodates management at other spatial scales. The LMEs offer a framework for doing this in a structured manner from both scientific and management perspectives. The overall state and integrity of the ecosystem is a reflection of the status of species and habitats and their interactions at all appropriate scales within the LME.

Click here for more information about the ecosystem approach. 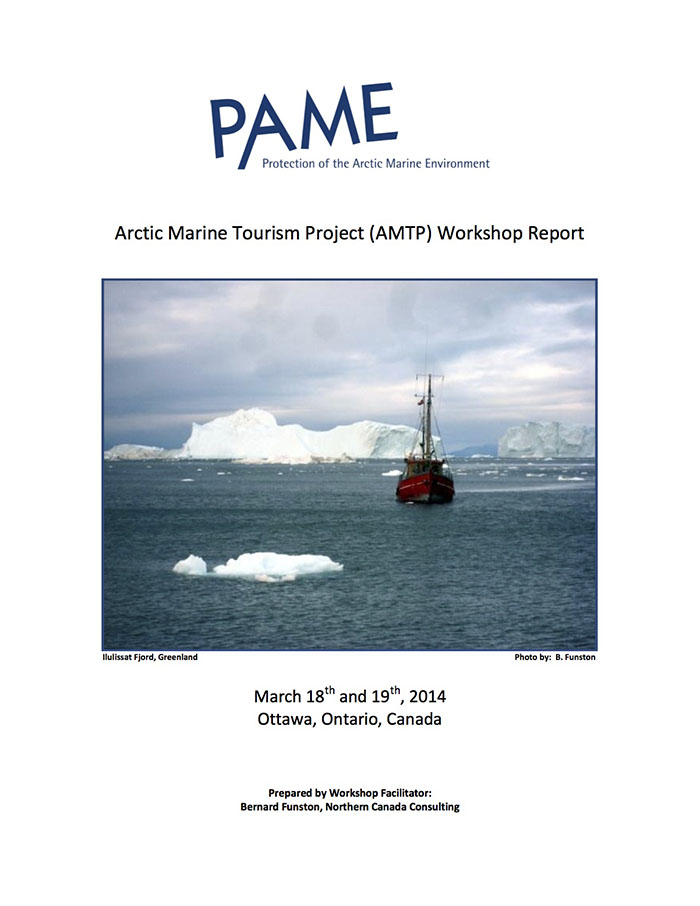 The Arctic Marine Tourism Project (AMTP) Workshop Report has been published on the PAME webpage.

In broad terms the AMTP is attempting to identify issues or gaps where the Arctic Council can add value by articulating best practices in relation to vessel-based Arctic tourism. In undertaking this project PAME seeks to produce a best practices document that:


The workshop advanced understanding on all these matters and generated a solid basis for further work on the AMTP.

Written by
Published in News Archive

The Arctic Monitoring and Assessment Programme (AMAP) has launched a call for experts to our Arctic Council project “Adaptations Actions for a Changing Arctic – AACA”.

Call for nominations of experts to take part in an AMAP project. Request for climate, environmental, socio-economic, and adaptation policy experts as Lead Authors and Contributing Authors for a scientific study of the Bering/Beaufort/Chukchi region.

The letter has been uploaded to our website at this link or can be downloaded here.
Read More

The Arctic Marine Tourism Project (AMTP) is part of a renewed effort by the Arctic Council to analyze and promote sustainable tourism across the circumpolar Arctic. The overall objective of the AMTP is to provide guidance to a range of Arctic stakeholders on means to strengthen and promote sustainable Arctic marine tourism, defined (in the 2006 Arctic Council report “Sustainable Model for Arctic Regional Tourism”) as tourism that minimizes negative impacts and maximizes socio-cultural, environmental and economic benefits for residents of the Arctic.

Organized by the Arctic Council’s Working Group on the Protection of the Arctic Marine Environment (PAME) and co-led by Canada and the United States, the AMTP will identify issues or gaps where the Arctic Council can add value by articulating best practices in relation to vessel-based Arctic tourism and is primarily focused on aspects of marine tourism that fall outside the competency of the International Maritime Organization (IMO). In addition to holding two workshops dedicated to this issue, it is expected that the proposed creation of an ‘Arctic Marine Tourism Best Practices’ document will be put to Arctic Council Ministers for consideration in spring 2015.

The first AMTP workshop was held in Ottawa on March 18-19, 2014. The workshop involved representatives from industry, government, academia, the not-for-profit sector, and local communities discussing emerging trends, potential impacts and opportunities, and oversight of marine tourism across the Arctic Region. Participants engaged in robust discussions and began to coalesce around potential concepts for proposed “best practices”, such as better engagement and communication between industry and communities.  PAME will continue its inter-sessional work to advance the project leading to a second dedicated AMTP workshop planned for the fall of 2014.

Click here for a backgrounder on the Arctic Council.

Written by
Published in News Archive 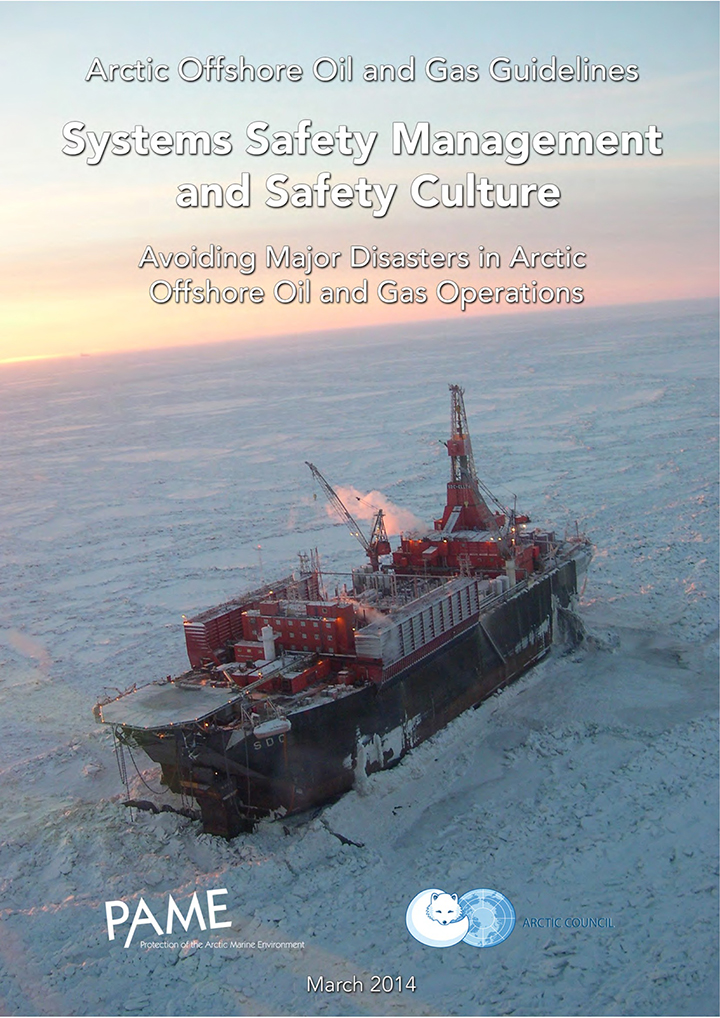 The Arctic Offshore Oil and Gas Guidelines (AOOGG): Systems Safety Management and Safety Culture, was organized as a project under the Protection of the Arctic Marine Environment (PAME) Working Group of the Arctic Council. The project was led by the United States.

The work was reviewed and comments received at the biannual meetings of the PAME Working Group. In addition, input was received from two expert workshops in Keflavik, Iceland in June 2012, held jointly with the Recommended Practices for Prevention of Pollution (RP3) workshop by the Emergency Preparedness, Prevention and Response (EPPR) Working Group, and in Halifax, Nova Scotia, Canada in September 2012. Written comments were also received from many individuals and organizations including a wide range of representatives from Arctic governments, non-governmental organizations, industry, indigenous people, and the scientific community.

This Guidance document has been circulated widely to Arctic States, Permanent Participants and Observers, as well as academia, non-profit environmental and industry associations, and other stakeholders and has also had the benefit of editing by a professional writer/editor.

The second SAO meeting of the Canadian Chairmanship was held in Yellowknife, Northwest Territories, Canada March 25-27.

The Executive SAO Meeting will be held during the day 25 March. The SAO/PP Plenary Meeting will then begin with a dinner on the evening of the 25 March.

More information about the meeting can be found here

The Arctic Offshore Oil and Gas Guidelines: Safety Management Systems and Safety Culture, was organized as a project under the Protection of the Arctic Marine Environment (PAME) Working Group of the Arctic Council. A new report was released in March 2014 and is available at

The Indian ambassador, Mr. Ashok Das, visited the University of Akureyri the March 17th to meet institutions and specialists who are involved in Arctic related activities. Mr. Das introduced India's interests in sending scientists to Iceland to be trained in glaciology. The glaciers in India are located high up in the Himalaya and are not suitable training grounds due to difficault and dangerous environment. While glaciers in Iceland are more accessable. Mr. Das also expressed India's interest in the Arctic region and said that India can be a suitable partner in developing the region in issues related to technology and IT services.